Sodium sulfur (NaS) batteries are a type of molten salt electrical energy storage device.[1] Currently the third most installed type of energy storage system in the world with a total of 316 MW worldwide, there are an additional 606 MW (or 3636 MWh) worth of projects in planning. They are named for their constituents: Sodium (Na) and Sulfur (S).

Although the battery’s conceptual origins stem as early the World War II era as a way to power Germany’s V-2 rockets, significant research and development of the sodium sulfur battery for modern energy storage began only around two decades ago through a joint effort between Tokyo Electric Power Company and NGK Insulator, Ltd. [1], [2] Currently, the battery’s performance is well tested and it enjoys notable recent commercial experience. 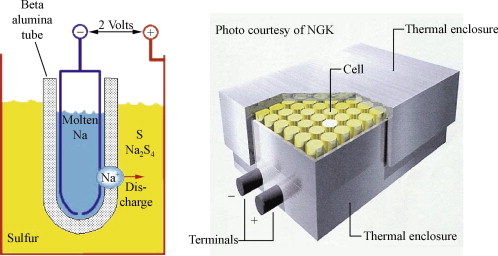 The typical sodium sulfur battery consists of a negative molten sodium electrode and an also molten sulfur positive electrode.[3]  The two are separated by a layer of beta alumina ceramic electrolyte that primarily only allows sodium ions through.[3]   The charge and discharge process can be described by the chemical equation,

Sodium sulfur batteries are typically operated at high temperatures between 300–350° C.[3]  Below this temperature range, the battery is inactive.[1]  This type of  battery has the following attributes:

Properties of the Sodium Sulfur Battery

Due to requiring high temperatures to operate, uses for sodium sulfur batteries are limited to large, immobile technologies, such as distribution grid support. Other uses include, but are not limited to, wind power integration, and high-value applications on islands. The largest installation of sodium sulfur batteries powers a wind-stabilization project in Rokkasho, Japan.[6]

Usage of this battery type in space missions has been proposed in 1986 and1991 due to its high energy density and high charge/discharge rates.[7][8] However, no official source can be found stating operational use of this battery outside of testing.

One advantage of a sodium sulfur battery is that it is a mature system with established experience and presence on the market. Since their container is entirely sealed while in operation, they are environmentally friendly. Their cost per capacity is in the middle compared to other options. Although they are not the most cost effective in terms of cost per capacity or output and duration, this type of battery does not require a supportive geographical location (such as an abundance or water and space or an underground cave) to remain in operation like pumped hydro systems and CAES systems. The battery also has no self-discharge, unlike lead-acid options, NiCd options, and Li-ion options.[9] Their extremely quick response time make them an excellent candidate for responding to changes in demand in a grid system.[4]

The battery type’s main disadvantage is that it requires a heat source for operational conditions. This makes the battery more or less immobile and impractical for residential use, especially when compared to the Li-ion rechargeable batteries currently employed on most mobile computing devices. The most unfortunate of all, is it also drains part of the battery’s efficiency since the heat source needed for continuing operation is maintained using part of the battery’s own stored energy.[3]